Good looking, athletic Lieutenant Tommy Courten has a bad guy, good guy personality.  Rough and ready to go at a moment’s notice,  necessary attributes for the front lines of Vietnam, with a gentle, thoughtful interior that gives him the control and ability to reason, making it possible to live in an ordinary society.  He marries but that doesn’t work. He works for IBM, but that company is too confining and controlling.  He just doesn’t fit.  Though Tommy doesn't really fit the Marines either, he does his best and learns some valuable skills he will soon need. Then his kid sister, Ellen, is killed. Her boyfriend cannot keep her around once she becomes pregnant because he is married.  If she had just left him alone, it would not have happened, he theorizes.  Tommy must get revenge.  The police and military do not seem to be able to do anything because the accused, Private Rodney Zapata, has fled to Bogota.  Tommy takes justice into his own hands and flies to Columbia in search of Rodney.  There he finds his prey but he also finds Luz from an area called Guajira.  Only Luz and her people can save Tommy’s life, not just his physical body but also his heart and soul.

Ed Brodow has written a crisp, intense story about the life of one man, Tommy Courten through the eyes of another, a friend of Tommy’s.  This unique treatment gives this novel a sense of intensity as his friend sees Tommy’s life through his own reflections on his life and those of friends and family close to him. Tommy’s friend sees different experiences as “Stamps on the Forehead” of individuals. The Vietnamese War was a stamp on Tommy’s forehead, a time in his life that would change him and not allow him to move forward. Then, as he is trying to do just that, Ellen’s death again forces him back into his old pattern. Only exceptional wisdom and love can change the stamp on Tommy’s forehead.

This is an exceptionally well written story and I HIGHLY RECOMMEND it.
Reviewer:  Elaine Fuhr, Allbooks Reviews
Posted by fixerbook at 9:35 PM No comments:

"My normal preferred genres of books usually doesn’t include historical novels.  I don’t know why, but maybe the writers didn’t really impress me with their descriptions…or maybe I just got older and my tastes changed (kind of like they do with food).  Needless to say, I truly enjoyed reading Fixer and getting a taste of what it was like in the early 1900′s in New York and what it was like to be an immigrant and Jewish on top of that.  Politics were a whole different game back then and it was fascinating to learn about positions that don’t exist any more, but perhaps they should.
"The author takes you through a very historic period in New York and the dark and seedy underbelly of politics.  While the book is fiction, there is some truth to the story.  He weaves a tale that makes you feel like you are there and living in that moment and can imagine what it was like to be an immigrant at the turn of the century.
"This story really grabbed me and kept me entranced with the characters and how they overcame adversity for their time.
"I definitely recommend this book and give it 2 thumbs up!  If you have a Kindle or other E-book reader it is a steal at $2.99 on Smashwords."
Storeybook Reviews

Posted by fixerbook at 11:34 AM No comments:

Posted by fixerbook at 10:42 AM No comments:

5.0 out of 5 stars Fabulous Satire!,
By
mrswd - Amazon Verified Purchase
This review is from: The Man Who Could Not Make Up His Mind (Kindle Edition)
I wasn't sure at first what to expect from this zany inside view of New York's creme de la creme but the author captured my attention on page one and never let go. Clifford Day Vanderwall reminds me of so many people. He is a good person but a kind of poor soul who is vulnerable to less-principled individuals like Shirley Horner, a predatory woman who takes him for all he is worth, financially and spiritually. But what really impressed me about this story is the witty way in which Brodow presents his characters. Not since Bonfire of the Vanities have I read a black comedy that works as well as this one does. The zingers, one-liners, and absurd situations that Brodow concocts are worthy of a contemporary Oscar Wilde. The characters are fleshed out beautifully, even the lesser ones. I felt like I knew these people intimately. Brodow kept me guessing where we were going up until the last five pages but the ending was so hysterical that I felt amply rewarded for all the suspense I had endured. "The Man Who..." had me laughing out loud over and over again. This is an incredible read.
Posted by fixerbook at 12:14 PM No comments:

My latest effort, a novel about alien abductions, is under way. I started writing yesterday and got up at 5AM today to continue. Working title is "Women from Venus" -- A psychologist who specializes in debunking alien abductions falls for a woman who challenges his strongly-held views. It is loosely based on a relationship I once had with a woman who believed she had been abducted.

Posted by fixerbook at 6:22 AM No comments:

The Stupid Bowl Bowls Them Over

In its first day as a Free Kindle Book, The Stupid Bowl hit number two in Sports Fiction on Amazon. Today, Feb. 7, is the second and last day of this promotion. Order your free Kindle copy here: ORDER

5.0 out of 5 stars ABSOLUTE PERFECTION, A MASTERPIECE!,
By
SURETY RISK MANAGEMENT - Amazon Verified Purchase
This review is from: Negotiation Boot Camp: How to Resolve Conflict, Satisfy Customers, and Make Better Deals (Hardcover)
I first found your book on the shelf at my local library. I enjoyed it so much, in fact, that I bought a copy for myself and my Team of Professional Operators. I'm going to have all of my Team Members read your book before I have them accompany me on any future business venture marketing meetings. This is absolutely "must know" stuff for anybody involved in the business of negotiating contracts. Your book has truly enlightened me and confirmed a whole lot of suspicions that I have developed over time. I can tell that you really poured your heart and soul into this book. You really hit the bulls-eye with your work! Thank you so very much!
Jason P.
Owner, Surety Risk Management

Posted by fixerbook at 7:06 AM No comments:

Today Is the Day

Don't forget: The Stupid Bowl is FREE today!
Posted by fixerbook at 12:43 AM No comments:

February Speaker of the Month

Ed Brodow is FEBRUARY SPEAKER OF THE MONTH at CBA Speakers Bureau.
Posted by fixerbook at 9:40 PM No comments:

5 Stars for The Stamp


Review of The Stamp by Cara Wilson-Granat, Amazon

I recently finished reading author Ed Brodow's compelling novel, The Stamp and now wish I could go see the movie! It's that good and that real you can almost taste and smell the edge on which this story straddles. On one level The Stamp is about an ex-Marine in search of his beloved younger sister's killer. The brother's passionate search for blood-thirsty revenge takes him to the darkest jungles of Columbia and we are both cheering for him and holding our breath in fear as he finds himself deeper into a maze of misery that reflects his own inner demons. And that's the other level--the inner journey that Tommy, the main character, fights with the most when he is finally faced with realities and questions that shake him to the core. Who's the real killer? Who really wins in this quest of an eye-for-an-eye battle to the death?

Brodow is a fine-tuned story teller who manages this heart-pounding modern-day classic with deftness and grit. Like a hologram, the story and perspective flip back and forth keeping the reader flipping pages wildly in search of answers along with the extraordinary characters he introduces in this fascinating read. One thing's for sure, The Stamp will definitely stick to you long after you put it down. It's that damned good. 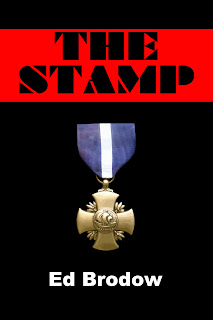 Posted by fixerbook at 9:13 PM No comments:

Can You Make Up Your Mind?

The Man Who Could Not Make Up His Mind by Ed Brodow has been published on Kindle, Nook, and Smashwords and sells for 99 cents.

Hilarious satire about a born victim and the predator who loves him.
Clifford Day Vanderwall, a Wasp who attended Princeton and The Wharton School, has a trust fund, a nifty job at IBM, and a spacious apartment on Manhattan’s Upper East Side. What’s wrong with this picture? Clifford cannot make decisions. He would rather procrastinate hoping the decision will go away by itself. He becomes the helpless victim of Shirley Horner, a predatory fortune hunter who traps him in a web of deceit and gradually assumes control over every aspect of Clifford’s life. She eventually destroys his career, his love life, and his self-esteem. Lacking the ability to make up his mind, Clifford appears to be doomed in this outrageous satire about love among New York’s upper crust. 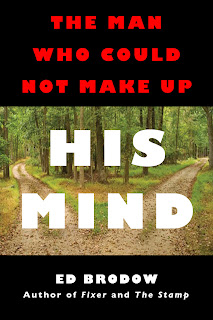 Posted by fixerbook at 9:08 PM No comments:

THE STUPID BOWL by Ed Brodow will be FREE on Monday Feb. 6 and Tuesday Feb. 7.

Are you sick and tired of the Super Bowl? The Stupid Bowl is a short satire about Elliott Madera, a middle-aged New Yorker who is fed up with people asking "Who won the game?" Holding court on his bar stool at a popular West Side watering hole, Elliott is a recovering sports addict who harangues his handball buddies for being brainwashed by all the sports they watch on television. A humorous breath of fresh air for anyone who ever wanted to throw their TV out of the window. 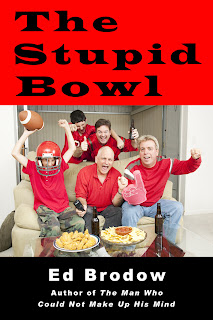 Posted by fixerbook at 7:22 PM No comments:

fixerbook
Ed Brodow is a bestselling author and motivational speaker. His novel Fixer has been described as “a modern classic.” His business book Negotiation Boot Camp has been featured on PBS, ABC National News, Fox News, Inside Edition, and Fortune Business Report. An internationally recognized expert on the art of negotiation, Ed was dubbed "King of Negotiators" by SEC Chairman Harvey Pitt. Ed is a veteran member of Screen Actors Guild, appearing in American and European movies with Jessica Lange, Ron Howard, and Christopher Reeve. A former Marine Corps officer, Ed graduated from Brooklyn College and lives in Monterey, California. His website is www.brodow.com/.